Off the side of Leicester square, the Rainforest Cafe is a hidden gem on the city of London.

I wish I’d gone to this place as a kid because I would have been obsessed! In fact, the reason we went was because the friend I was travelling with had been there as a kid and wanted to go back, which was like how I felt about wanting to revisit the Pirates of the Caribbean themed hotel in Disneyland.

With rain-forest decor of tropical plants and animals, and brought to life by the sounds of the rain-forest, it’s like it came right out of Disneyland! In fact, this place actually put the restaurants in Disneyland to shame, as not only did they play almost exclusively Disney songs, but the food and decor was infinitely better than what I saw in Paris. They even simulated a short monsoon with the sounds of rain and thunder, and flashing lightning!

We went in for lunch and ordered sides that turned out to have very generous portion sizes. They had a lot of vegetarian options, but only one vegan which was a veggie burger. The staff were really nice about the fact that we didn’t order any mains – most places get annoyed, but we only wanted something light. I just ordered chips and corn on the cob – which was better than similar things I had in the Disney restaurants. 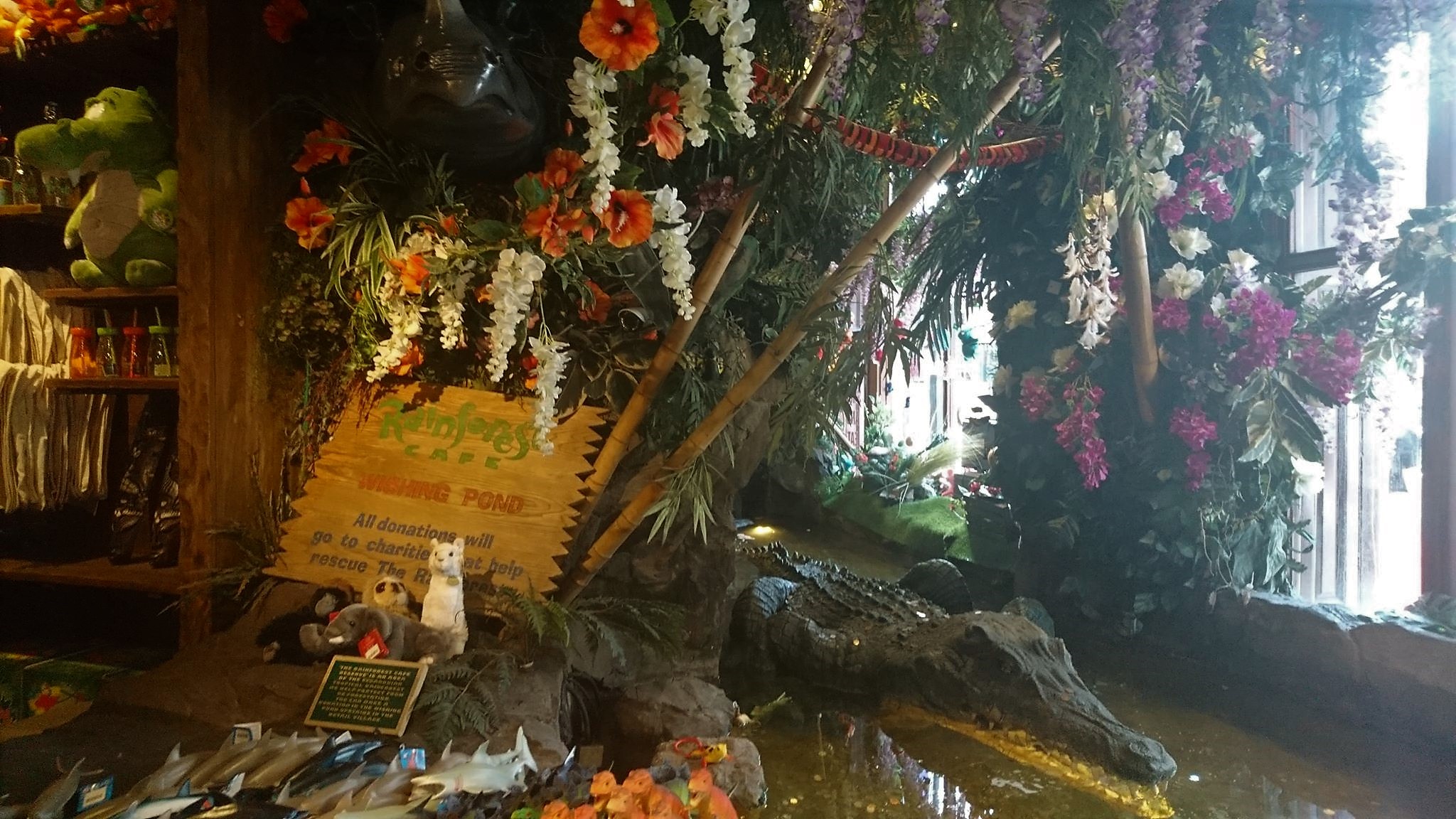 What to keep in mind

It was quite expensive, and on top of that everywhere in London adds on a service charge so your meal always costs more than what the menu says, some places only do it for tables with a certain number of people or if the goes over a certain price but for the most part, it’s there regardless of how many people eat and what you ordered. The service charge is pretty much a tip split between the staff. I’m all for tipping people, but I’m just not a fan of it being calculated into the price and pretty much being a requirement.

Tipping in Europe is not the way it is in America, where it’s an expectation and should be a certain percent of the bill, because people working here don’t solely get paid in tips or have to rely on tips more than their actual paycheck.

Again, I’m all for tipping people and very often, if not nearly always, tip in restaurants and taxis, but where I’m from it’s not treated like it’s mandatory. In fact, eating at home, there’s almost never a service charge (unless it’s a huge group) so I was surprised. I guess it’s just one of the ways London differs to here.

This isn’t a complaint about the way eating out in London is, just a comment and a bit of a forewarning for those who’ve never been there! We had the same experience in the Hard Rock. Just make sure you have extra money to pay for dinner with. 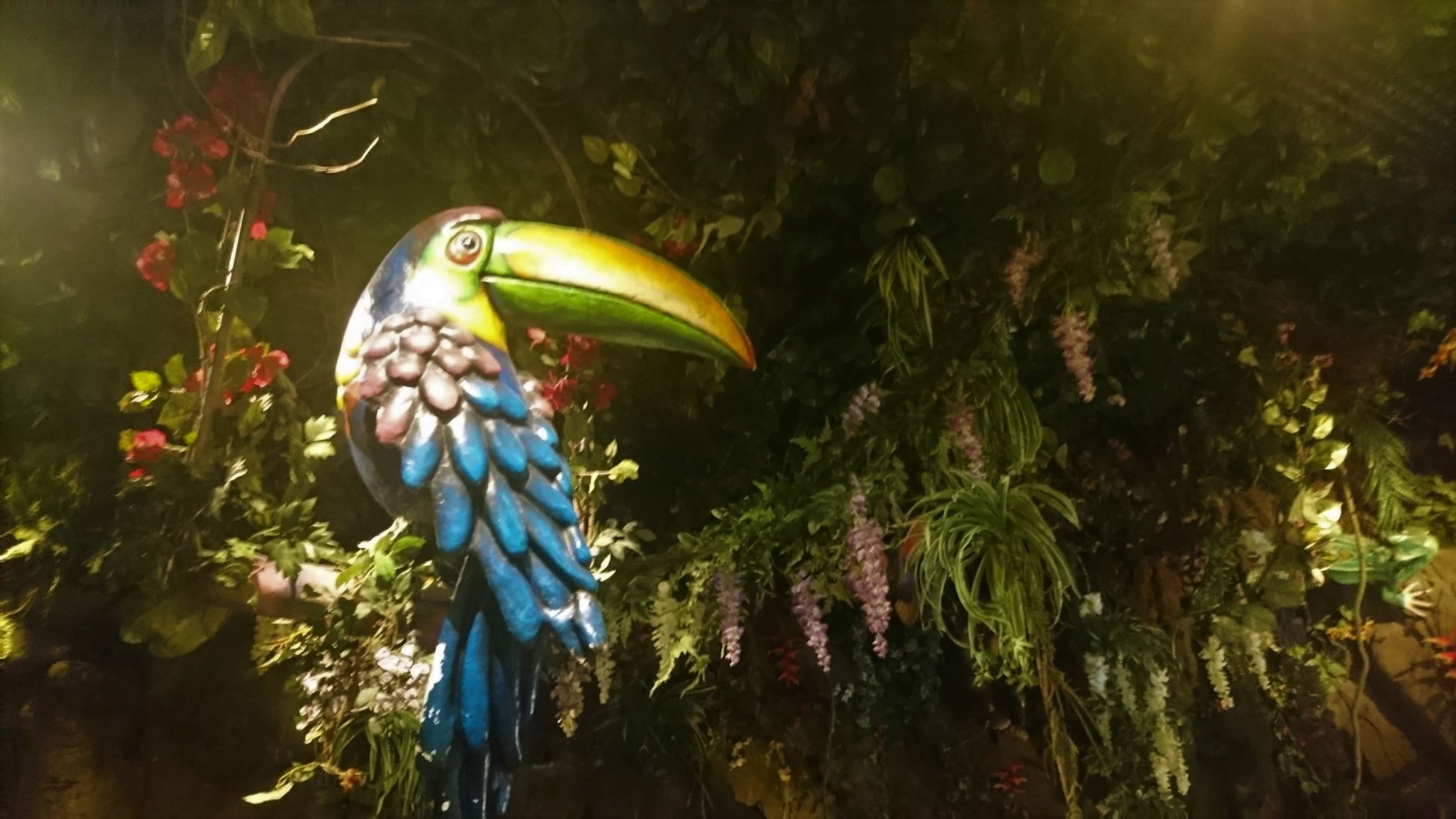 If you have kids, they’ll love it, and if like me you’re just a child at heart, you’ll love it too. Their kids menu actually seemed reasonably priced as it was around £16 for what I recall was about three courses! Cafe actually isn’t an accurate word to have in the title, it really is more of a place for an evening meal, but I guess the Rainforest Restaurant didn’t have the same ring to it, despite the alliteration!

The dim lighting meant that the pictures I took weren’t great, plus I took them on my phone because I was afraid of travelling with my camera, so bear in mind that these pictures do not do this place justice!

I would love to go back and have a proper meal when I have more time and money!