I’ve always wanted to eat in a Hard Rock Cafe and in London that dream came through. I’ve been to a few Hard Rock cafes, like New York and Baltimore, but was only ever in the gift shop. As I was always on a school trip or with my parents, I never got the chance to eat there. For someone with so much Hard Rock merch and memorabilia, it was getting sad that I hadn’t gone! Here’s my experience eating vegan in the Hard Rock cafe. 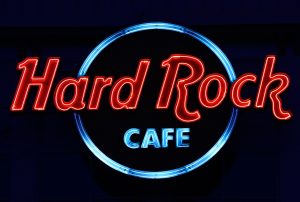 The Hard Rock near Westminster and Hyde Park was a few minutes walk from our hotel so there was no reason not to eat there.

What I only learned afterwards, was this was the first Hard Rock cafe ever! The Hyde Park location opened in 1971. Now there’s 185 Hard Rock’s around the world!

I believe London actually has two Hard Rock cafes, both of which are thriving. We passed the other one on our last day, and it looked just as busy as the first location.

The wait time before we could actually sit down and order was over an hour. They give you a buzzer and when that beeps you get seated. After that you have to be seated and served. It is a long time to wait, but it’s always busy. The wait can be longer during busier periods, so maybe don’t go if you’re really hungry. The staff were really nice, so we talked to the waitresses about their tattoos for awhile.

We didn’t mind passing it with a drink and a look around the gift shop.

I had the Moving Montains burger, which is made vegan by simply asking for no cheese. Similar to the Impossible Burger, the Moving Montains burger is Hard Rock’s European meatless meat. US locations have the Impossible Burger. The burger comes topped with an onion ring, lettuce and comes with a generous portion of chips. I normally don’t even like onion rings but the one on the burger was really good.

It was the best burger of my life, by a landslide.

I’ve never had a burger substitute taste so close to the real thing, the thankfully the texture was slightly off real meat. I prefer no-meat-meats to not be  indistinguishable from real meat because I start worrying that it might actually be meat – like  the Gregg’s  vegan sausage roll which tasted and felt scarily real.

I absolutely have to try the Impossible Burger sometime!

Eating in the Hard Rock Cafe was better than I thought it would be. I can’t wait to eat in another one.

If you’d like to read more about my time in London, here’s my experience with the Harry Potter sights, and Sherlock Holmes attractions.

Have you eaten in a Hard Rock cafe before?

Check out my video about eating vegan in the Hard Rock cafe, and everywhere else in London:

12 thoughts on “Eating (vegan) in the Hard Rock Cafe, London”