I got Turtles All The Way Down with a discount code from Book Depository that only gave me a few books to choose from. I ended up giving John Green another chance and was pleasantly surprised.

Before reviewing the book I need to explain why I was hesitant to read something by John Green.

The first John Green book I read was the Fault in Our Stars, I thought it was a bit pretentious but I put that down to Gus and Hazel being a bit pretentious. Then I read An Abundance of Katherine’s, Looking for Alaska, and Paper Towns. I hated an Abundance of Katherine’s because I predicted what would happen straight away and why would you feel the need to put maths into it? Paper Towns and Looking for Alaska we’re almost the same, and even an Abundance of Katherine’s was similar. They all had pretty different plots but John Green has a monomyth and if The Fault in Our Stars was narrated by Gus instead of Hazel it would be the exact same.

It’s like my concern I expressed about Louise O’Neill in The Surface Breaks, people will get bored if you only know how to write one character and then place them in different stories with a different name.

Turtles All The Way Down broke the pattern.

What Turtles All the Way Down is about: 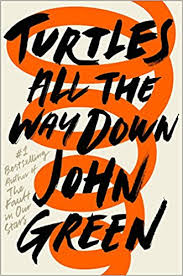 The story followed 16-year-old Aza Holmes as her and her best friend Daisy as they try to solve the mystery of what happened to her childhood friend’s dad. However, this isn’t a happy go lucky mystery story or reminiscent of Sherlock – despite sharing the same last name – or Nancy Drew.

Aza struggles with mental illness making her worst enemy herself, and how can you solve a mystery, date, and be in a relationship when you can’t function?

I related so much to Aza, it was nearly like I was reading a story about myself. I loved how Green cut the crap of creating pretentious characters and made new people. I saw a lot of myself in her best friend Daisy – except I was indifferent fandoms – but I haven’t related to a character as much as I did with Aza in a long time

I’m also glad he didn’t follow the “tragic depressed teen” route or the “angsty no-one-understands-me” teen.  I’m also glad she wasn’t miraculously cured as well, and that mental illness wasn’t romanticized either. It was gritty and realistic. The reality for Aza and many others is that you’re always going to suffer from your mental illness, you just learn how to live with it.

I was also glad I didn’t predict the ending straight away which I’ve experienced in the past with Green.

Turtles All The Way Down was a refreshing change and I wish I’d read it sooner. I flew through the book because I didn’t want to stop reading and was so sad to have finished.

I absolutely recommend it. You might also enjoy Girl, Interruped, and these other books about mental health if you liked this

18 thoughts on “Book Review: Turtles All the Way Down”