The Green Mile is one of Stephen King’s most beloved tales. Originally the Green Mile was a 6-mini-book series, but there are versions where they’re all included in the one book.

It was also adapted into a film in 2000, starring Tom Hanks, which is well worth watching.

What the Green Mile is about: 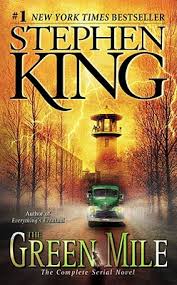 The Green Mile follows an elderly Paul Edcombe recalling his days working in the Cold Mountain Penitentiary  where he conducted executions on prisoners sentenced to death.

However one of the prisoners is unusual and Paul doubts the man is guilty. John Coffey was sentenced for the rape and murder of two little girls yet the gentle giant proves to be a healer, curing Paul’s agonising  urinary tract infection and saving the pet mouse, Mr Jingles, of a fellow inmate.

When Paul’s bosses wife gets an inoperable brain tumor he wonders if John Coffey can save her.

It’s rare I find a book I get so engrossed in that I can’t put it down, but no one knows how to write as compelling as Stephen King does.

The Green Mile was devastating, thought provoking and dealt with the likes of racism, conscience, and life and death. King even manages to make you feel for some of the most volatile people on the planet, he brings forth the uncomfortable reality that monsters are among us. It’s one of the stories that stays with you long after you’ve put the book down. I can say the same for the movie as well, I rewatch it fairly often. There are a few differences but nothing so major it will annoy you, if anything, the book is actually more unsettling than the movie.

I 100% recommend it to fans of the movie and fans of King or suspense novels in general.

If you liked this book, you’ll also like Needful Things.