The original 1988 Heathers was a satirical comedy about the newly popular Veronica Sawyer’s (Winona Ryder) disillusionment with her new life in the popular clique: the Heather’s. So what’s wrong with the Heathers reboot?

Heather Chandler’s red scrunchie is passed on as a symbol of her power. It goes from Heather Chandler, to Heather Duke to Veronica. Veronica is usually clad in blue, arguably to represent how gaining popularity wasn’t all it was cracked up to be. Kurt and Ram are also the embodiment of the “sexist beer-guzzling jocks” in the high school trope. Everyone picked on Marta “Dumptruck” (Carrie Lynn) because 1. They were mean girls, and 2. Martha was everything the popular kids were not.

Heather’s served as a caricature of school life, and I haven’t even begun to talk about the teen suicide satire element.

The musical stayed relatively true to the original, not 100% but that’s expected when transitioning to a different platform. The big thing was JD was much less sociopathic. They also merged Martha and Betty Finn together, so Martha was the friend Veronica dumped for the Heathers. The essence of the original film was captured pretty well in the musical. I’m actually a big fan of the musical.

We got some bops out if it such as Candy Store, and Seventeen. 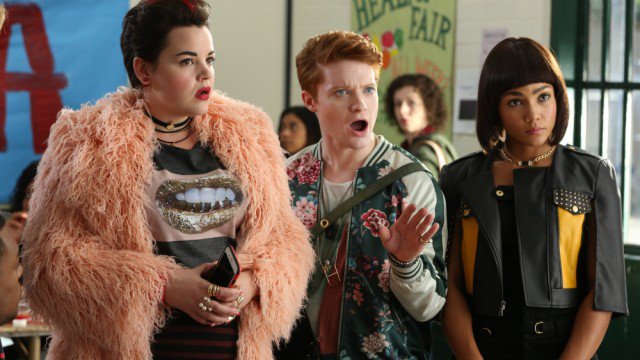 To be clear: I am 110% for representation. I think representation is so important, and LGBTQ+ people, POC, and different body types should definitely get more of it. However it should be done correctly.

The reboot seems to have flipped it on its head and implies the “average” students are now the marginalised. In fact the more of a token *insert marginalised identity here* you are, the more popular you are in new Heathers.

Having POC, LGBTQ, fat Heathers was actually poor representation. In this instance as those often marginalized are the ones bringing others down. It feels more like “anti-SJW” propaganda. The show suggests that those who want to be seen as equals are actually setting out to oppress the more “privileged”. Which obviously isn’t the intention of those discussing the issue of representation.

Heathers was ahead of it’s time. It was much darker and smarter than Clueless and Mean Girls which came after it. Sometimes you cringe at the likes of JD (Christian Slater) portraying Kurt and Ram’s (Lance Fenton and Patrick Labyorteaux)  “suicide” as the result of a “repressed homosexual suicide pact”. However, it’s supposed to make you uncomfortable. It’s supposed to exaggerate these things.

Heathers poked fun at how society treated teenagers, and the issue of teen suicide.

The original was very much a whitewashed hetero-normative story. It’s not right to be like that, and they should have diversified a bit. However, the issue of representation wasn’t as much of a hot topic as it is now.

Take a look at Friends, which received a lot of criticism from younger viewers watching it for the first time on Netflix recently. They grew up in a period where being PC is more encouraged and considered than in the 90’s and early 00’s. I’m old enough to remember when someone of the more risque Friends’ jokes was generally acceptable and also young enough to see why they are problematic today.

Heathers didn’t consider more diversity in its day. It largely played on stereotypes and caricatures. The reboot looks like it completely lost touch with what it was based on or straight up didn’t understand it.

Hollywood should absolutely represent the diversity of the human race, but not like the Heathers reboot. Heathers made its point and I hope it doesn’t get tarnished.

In short; what’s wrong with the Heathers reboot? Everything. Absolutely Everything.