I have an entire section of my Bucket List dedicated to New York.  Most of it is full of typical tourist things, such as See the Lion King on Broadway , The Statue of Liberty, and see a Radio City show. Of course, no typical tourist trip to New York is complete without paying a visit to the Empire State Building. Seeing the Empire State Building, and even just NYC itself, is a must for everyone’s bucket list.

We got tickets to go all the way up. However, some of the floors were being renovated at the time, so we got close to the top but not the whole way. The New York skyline is amazing, no matter what level you’re at.

We were lucky that it was a clear day so the view was extra beautiful.

You can go out to the balcony and look out over New York, but there’s things to do inside too. They have plaques, pictures, and screens telling the history of the construction. 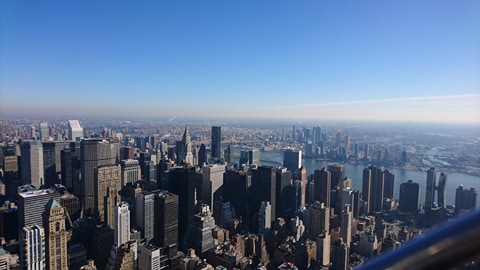 To be honest, the experience was pretty scary for me. I get really bad anxiety flying and going to new places for fear of something happening. It was still awe-inspiring to look out at the New York from the top of the Empire State Building. However, I’d be lying if I said I enjoyed myself.

I actually got the same sensation you get when a flight takes off on the elevator up because it’s that tall. There was two stops where we got off to look out the windows and see the history of how it was built.

As it was just after Christmas, I did feel reminded of Elf as that’s where Buddy’s dad worked so that little bit of humour definitely made it feel less scary for me.

The fact that I didn’t enjoy myself isn’t a reflection on the Empire Statue Building experience. Literally anyone else would have had a great time.

I’m still glad I went and got to tick seeing the Empire State Building off my New York Bucket List.

Is seeing the Empire State Building on your Bucket List? What would you like to do in New York?