I saw a post recently about a bar that supposedly banned female-fronted bands because “girls can’t sing rock music” and it infuriated me.

As a girl who likes rock music, my whole life has been spent being told that it’s a boy’s scene. When I was in bands, being the “female bassist” was made into a big deal when I wanted to be treated just like everyone else. I wanted to be treated as just a musician, not as “a girl playing the bass oh wow!”. As a fan, I’m often told that I only like my favourtie bands because they’re attractive or I’m trying to be cool or different. Sure, Gerard Way is fine as hell, but I didn’t buy their albums to listen to their faces. I genuinely and truly love that kind of music, the appearance of the members means very little to me.

My favourite artists may be My Chemical Romance and David Bowie, but after those two there are a whole lot of women who rock and I strive to be like.

Vocally, Lzzy Hale, Taylor Momson, and Amy Lee and where it’s at for me. They all have such unique voices and make amazing front women for their bands. (Halestorm, The Pretty Reckless, and Evanescence, in that order). Lzzy’s voice is unmatched for power and is absolutely perfect for metal and rock, Taylor’s is musky and sultry when Amy’s is just raw and beautiful.

Hayley Williams is an honorable mention because very few emo phases went by without featuring Paramore and a lot of us probably wanted to be her at one point.

However, my favourtie women in the scene are not only talented but stand for something.

“I figured out it was a social thing, what women were allowed to do. At a very young age, I decided I was not going to follow women’s rules.” – Joan Jett 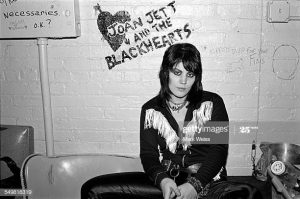 The Queen of Rock n’ Roll, joined The Runaways at only 15 years old. A lot of people think she just appeared out of nowhere with The Black Hearts, but she was very much in the scene in her formative years.

The Runaways, unfortunately, had a rough career with their manager being a massive creep, neglecting, taking advantage of, and abusing the girls. They were pretty big in Japan though and you might remember them from that time Kristen Stewart and Dakota Fanning played Joan and frontwoman Cherie Currie in the film adaption of her biography. In the 70’s it was pretty much unheard of for girls to play guitar or be in bands so an all-girl rock band was a big deal, especially one consisting of teenagers. After The Runaways, she struggled to be taken seriously and when no label signed the Black Hearts they just made one themselves, and the Bad Reputation is literally one big fuck you to those who didn’t take her seriously because she was a girl. I bet they’re sorry now.

“I want every girl in the world to pick up a guitar and start screaming.” – Courtney Love

Love her or hate her, she’s a large part of the rock industry, and almost as iconic as Nirvana during the grunge era of the 90’s.

Personally, Hole is one of my favourtie bands, sometimes I think I love them more than I love Nirvana. Do I think Courtney is perfect? I don’t. However, I enjoy her music and a lot of what she stands for. Being Kurt Cobain’s wife she was subject to jealous fangirls hating her, being overshadowed by him, and then spending her entire life after 1994 being blamed for his death. I know so many people who won’t give her a chance because of her reputation, funny how (as much as I love) Kurt wasn’t flawless either but he’s seen as an angel. Think of it this way, the women spent her career essentially competing with her husband’s band, being blamed for his death, being widowed, having drug & alcohol problems, and having to raise their daughter alone. Despite all those challenges she kept going and is still up and rocking today.

“Every night I sweat, I hurt myself and I don’t stop until the job is done because I want every little girl in the audience to walk away thinking that it’s possible – that they can do this” – Lindsey Way 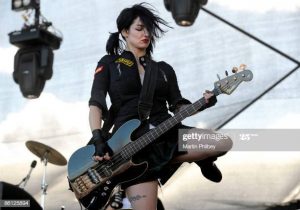 She may not be a vocalist, but she is an important part of the women who rock category for giving it her absolute all every show and standing up for the girls in bands. Not only does she play bass, but she also got into the band by literally blowing a flame into their faces in her audition to make up for her lacking bass skills after pretending she knew how to play. She’s also an artist and a mother. Like Courtney, she’s often overshadowed by her husband; Gerard Way of My Chemical Romance and deserves to be recognized in her own right as an artist. At one point MCR even opened for her band!

“When I was 11 years old, I had the dream of putting together a band of girls my age. All I wanted to do was take over the world with our music.” – Julia Pierce 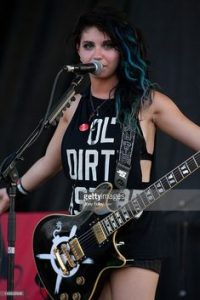 Once the frontwomen of Cherri Bomb at the age of 11 and left at 15, Julia returned with more music under the name Pyrce following her departure from the band.

Cherri Bomb was my favourite band next to MCR when I was 15. My username for everything even came from their song Let It Go (which came out before Frozen). They even subscribed to my band at the time on Youtube! If I didn’t love them so much I would have been immensely jealous because these were girls, my age, living my dream. Julia formed the band because she wanted to prove that girls could rock, and they certainly did rock having played Reading & Leeds, Oxygen, and even opening for Foo Fighters and Slipknot. She was one of the most passionate and talented musicians I’d ever seen, and so young, and more bands need to take note from her on how to give a show. Shortly after Julia left the band, the remaining members re-branded themselves as Hey Violet and moved towards a more commercial sound (I did see them and cry though). Julia took her time and only came back into the spotlight this year.

So, to those who say that women can’t rock, and especially to the bar that took it so far as to allegedly bar women-led bands, take a look at these ladies. So thank you, ladies, from teenage me who partially lived my dream in a somewhat local sense, and from current me for shaping me into who I am today.

If you enjoyed this post about girls who rock, here are some more women I admire and my Top 10 Songs by Women in Rock.

9 thoughts on “Girls who rock”