After reading Me and my Mate Jeffrey book I feel like Niall Breslin (Bressie) is a close friend of mine; that’s how open and raw it is. I also felt like I was reading my own life story. Obviously the events of my own life are worlds apart from Bressie’s but the feelings were similar.

Warning: this book and review discusses depression, anxiety, suicide, and self-harm. If those topics trigger you, you might want to click off this post and read something else. 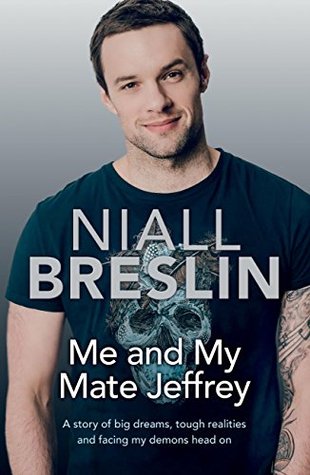 What Me and my Mate Jeffrey is about:

The autobiography is primarily focused on Breslin’s experiences with his mental health. Starting as a 13-year old boy developing insomnia and anxiety, to depression jeopardizing education, careers and relationships, right up to becoming an advocate for mental health and building incredible mental resilience.

What I love about it is that Breslin is not pretentious in his endeavour to write a book. He doesn’t try to wow us with extravagant language or unnecessary imagery to fluff up moments he describes, nor is this a novel of self-pity. He literally tells his story as it is, and this in itself is hugely admirable as he doesn’t paint himself as perfect but includes this downfalls as well as his virtues. It was awe-inspiring to read about someone who once suffered from severe depression and experiencing several crippling panic attacks a day, to grow into a figure of immense strength.

He says how by naming his depression “Jeffery” he was able to compete with it, but eventually Jeffery became more of an ally than an enemy. Furthermore, it’s greatly impressive how Breslin  turned his negative experiences into something positive, as by sharing his story he offers hope to others struggling with similar issues. Not only divulging personal anecdotes, Breslin also includes tips for mental fitness and includes the mechanisms for coping that work best for him such as CBT and mindfulness. He also details his goals of getting the country talking about mental health and the government more involved.

I say “everyone needs to read this a lot”, but I have never meant it more than I do with this book. Mental illness can be the most isolating thing to experience in the world purely due to the lack of understanding and stigma attached to it. Breslin offers a comprehensive explanation of what it is like to live with the likes of anxiety and depression. Mental illness can be extremely difficult to understand for those who haven’t experienced it, but if you’re trying to understand (because maybe someone you know is going though this), this book will be a huge help. For anyone struggling this is an enlightening read, I think Breslin’s hope was that people who read this may decide to reach out for help or start to believe that they too can overcome their issues.

A novel about depression doesn’t sound like the happiest of reads, but this isn’t despondent in the slightest. I urge more people to read this, or even to involve themselves in the discussion about mental health.

Sometimes you just hearing someone elses story is healing, which is why Me and my Mate Jeffrey is needed. Although he gives advice and shares what helps him, I think the best part is just reading his story. For those with mental illness, it’s comofrting and sinpiring to know someone else went throgh the same thing and survived. For those who don’t, it helps them understand what it’s like.

You can also check out Bressie’s mental health website, A Lust for Life, which I actually write for!