I don’t like making lists of my favourite books, albums, songs, movies etc because they always fluctuate. Something always comes along that makes me think “Wait, this is amazing!” or I simply outgrow what I once loved. For a long time, I didn’t have a favourite book, and felt like something was missing without one. A lot of people have this life-changing book that’s almost like a bible to them, they feel like every word was written for them and it’s almost like a part of their identity. Maybe I have my hopes set too high, but I haven’t had that experience. I’ve adored books, I’ve felt like a changed person after certain books, and seen people or bits of myself and life in a few but haven’t found that book yet – if such a book exists. I do, however, have a select few novels which I find myself re-reading often, every now and then I get an urge to read one again and it’s like coming home. So, I would classify those select few novels as my favourite books

The Bell Jar by Sylvia Plath

It saddens me that Sylvia Plath only published one novel in her lifetime, she also has a collection of short stories – which I’m yet to read –  but her writing style and The Bell Jar in itself was hauntingly beautiful. I love her as a poet, but I really wish she had produced more work like this.

The story mirrors quite a lot of Plath’s own personal life, but we can’t consider it a memoir. The novel beings with protagonist Ester Greenwood in the midst of her internship at a New York based magazine she won. She should be living the dream but can’t help feel disillusioned with the whole experience and is unable to pinpoint why. Once returning home, Ester’s despondency doesn’t shift and after several half-hearted suicides makes a real attempt, once found Ester is taken to a mental hospital for treatment. While in treatment Ester reminisces over memories and individuals in her life and the theme of conflicted identity emerges quite a bit. She also discusses her experience within the hospital and the daily events, but these revelations were my favourite aspect of the story. She wants to be everything, and not only be those things but master them: renowned writer, inspirational teacher, perfect mother, and wife, but lives in a world where she is limited to one. Again, it was beautiful not in a stupid “romanticizing mental illness way”, but in a sense that Sylvia Plath had a God-given gift of creating breathtaking literature.

The Book Thief by Markus Zusack

Set in a small town in Germany during World War II, the Book Thief centers around a young German girl, Liesel Meminger, or rather, Death focuses his attention on Liesel.

I was intrigued by the first line which was “Here is a small fact: You are going to die”, talk about a hook!

It’s a novel narrated by Death, correct me if I’m wrong, but I don’t believe that’s been done before. What I found amusing was how frequent but minor respites from the story were taken to allow Death to put forward his opinion or to warn us of what’s to come. Aside from the unusual narration, the story while harrowing was deeply compelling. Lisel must leave her mother to live in a German countryside with a new family. The plot unfolds to be absolutely devastating but shows the humanity of humankind as well as the unbelievable cruelty. I don’t think I’ve ever encountered such vivid characters either such as the hard-shelled but big-hearted Rosa, the abundantly warm Hans, the wise Max, or the flirtatious and charming best friend Rudy – I loved every single one of them. Maybe I see parts of people I know in them, maybe growing up in a street named after Heaven and still managing to have a childhood of mischief sounds intriguing, and as an avid reader, Liesel’s love of literature is endearing. I open it, and I feel like this book, and Himmel Street is home.

The Catcher in the Rye by J.D Salinger

This is a love it or hate it novel. I love it.

Holden Caulfield, a disillusioned 16 year, old finds himself expelled from his private school, Pency Prep, after failing all his subjects aside from English and causing the fencing team to miss a game in New York after losing the equipment on the Subway. He’s told to stay in Pency Prep until Christmas break starts but decides to leave and stay in New York for a few days.

While reading it I was practically muttering the word “phonies” in my sleep but I’ve never been so engrossed in a novel before. The term “couldn’t put it down” is cliche and overused, but I was practically in the book and almost oblivious to all else. Themes of innocence and teenage angst emerge. Holden is stuck pondering on the fate of the ducks in the pond of Central Park come winter when the lake freezes over, which – if you want to take the fancy English teacher-esque approach to looking at it – can symbolize asking where innocence goes as Holden is trapped between adolescence and adulthood. Holden tries to act older than he is, by calling everyone “phonies” or initially stating that he’s slept with several girls but reveals later that he is in fact a virgin. Many were annoyed by the fact that there appears to be little to no character development, and honestly, the last few pages had me wanting to slap him, but nonetheless I adored it because sometimes people don’t change.

The Perks of Being a Wallflower by Stephen Chbosky

It took a while to get into this book, I remember being irritated by child-like manner of writing Charlie had, but once I established that Charlie is no ordinary 16-year old it all made sense. It’s an incredibly harrowing tale but Chbosky is not upfront about this. Once you put the pieces together it’s beyond heartbreaking.

I relate to this so hard, too hard. I relate more than you know.

(side note: the movie’s soundtrack was fantastic) I’ve re-read this the most but haven’t picked it up in two years, maybe it’s time again. 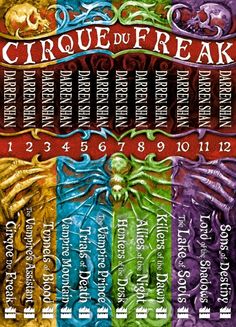 Darren Shan dominated my teenage years when it came to reading. There were times when I would literally have to put to book down and pace my room like “he did not just…”. I still maintain the belief that no one does plot twists like Darren Shan does, and I would credit him for being a big inspiration on myself when it comes to writing. I love/d this series beyond words.

Shan has his own take on the vampire genre and to the relief of many, avoids the glamorous vampires that dominate young adult fiction, although the series is aimed at younger readers. Twelve books sound like a big commitment to a story but they’re all short and with each, I was sad to see it end because these are all among my favourite books. I was left not knowing what to do with my life once finished, so invested in the manga version just to stay in the story.

Thankfully he writes books for grown-ups so I don’t have to say goodbye, you might like Midsummers Bottom, Sunburn, Procession of the Dead, and Molls like it Hot.

Harry Potter was bound to appear eventually, in fact, it would have been sinful not to mention it. They are without a doubt my favourite books!

People are usually surprised when I say that I didn’t actually read the books until after the movies had finished. The books, obviously, are miles better than the movies. That’s not to say that I don’t love the movies because I love this series with every fiber of my being, my childhood would have been much duller without Harry Potter and the world a less magical place. The books have vital parts in them that the movies missed out on and beloved characters are more alive on the page than on screen. You see the small little details and events that the movies simply couldn’t include and I felt much more apart of the story than I did before. No one will ever come close to creating what J.K. Rowling made and that in itself is magic.

Now that you know my favourite books, what are yours?

9 thoughts on “The 6 books and stories tied as my favourite: My favourite books”